This award is presented to an individual who has excelled as a mentor and who have supported and contributed to their mentees’ or proteges’ ongoing development. 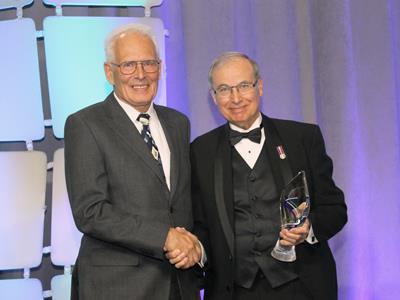 Although many accomplished leaders volunteer in formal mentoring programs, for a select few, inspiring and guiding others is innate. Dr. Andrzej Slawinski, P.Geol., is one of those natural-born mentors who selflessly share knowledge and time to help others succeed.

Chief Technical Officer at Waterline Resources Inc., Dr. Slawinski has more than five decades of experience in geology. Born in Poland, he completed his PhD in hydrogeology in 1977 at Warsaw’s Polish Academy of Sciences.

In 1982, Dr. Slawinski and his family immigrated to Canada. He is fluent in three languages and has a working knowledge of four more—evidence of his international experience gained from working in Europe, Africa, southeast Asia, eastern Siberia, and South America. He is the author and co-author of numerous publications and hundreds of consulting reports.

Always available and generous with his time, Dr. Slawinski has attracted and mentored many young talents. Some have changed companies or even provinces to work with him. Waterline Resources Inc. was formed by three of his mentees, who convinced him to delay retirement to join the company. He acts as a technical advisor for senior and junior professionals alike, encouraging critical thinking and respectful practice.

Dr. Slawinski leads by example with an endearing, humble personality and a strong passion for life’s adventures. An avid skier and mountaineer, he has attempted to climb the highest peak in North America twice, at the ages of 73 and 74. Although he had to surrender to the 6,194-metre summit of Denali in Alaska, he conquered the hearts of his colleagues, who tracked his progress from Calgary using a satellite messenger unit.

In the words of one mentee, Dr. Slawinski is “an inspiring combination of a brilliant mind and an accessible person.” He has a genuine concern for science and people, and has an exceptional ability to engage and lead young professionals. His integrity, honesty, and fairness make him a true model of the APEGA Code of Ethics and an outstanding mentor worthy of recognition.