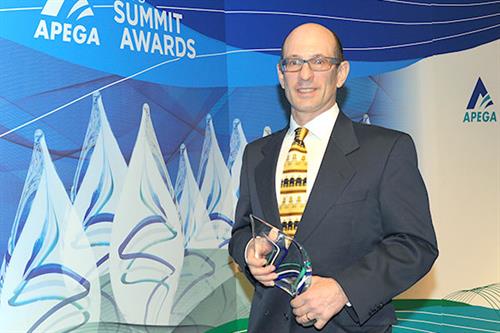 Paul Bauman, P.Eng., P.Geoph., takes community service to an international level. Since 1992, he has directed water exploration programs in many Middle Eastern and African countries including war-torn Yemen and famine-affected Malawi to help improve the quality of life for the people living in those areas. Mr. Bauman’s volunteer work includes a secondment to UNICEF, following the 2004 Indian Ocean earthquake and tsunami in Indonesia, to assist with the redevelopment and rehabilitation of water supplies in the region.

In 2012, Mr. Bauman began planning, reviewing, processing, and reporting on geophysical water exploration programs in Africa for Hydrogeologists Without Borders. In 2014, Mr. Bauman began volunteering with IsraAID to teach courses in hydrogeology and groundwater exploration in Kenyan refugee camps and Ugandan internally displaced persons centres. Not content with just teaching, Mr. Bauman applied for and received US$50,000 in funding from the Society of Exploration Geophysicists’ Geoscientists Without Borders® program to carry out a geophysical water exploration program around the Kakuma Refugee Camp in Turkana, Kenya. Following his successful work at the Kakuma Camp, doctors and other professionals at the Calgary Refugee Health clinic, and elsewhere, signed on as volunteers in both a clinical and educational capacity.

In addition to development aid work, Mr. Bauman provides his expertise conducting geophysical surveys for archaeological exploration projects involving some of the most important archaeological sites in the world. This has included exploring the Qumran Caves, where the Dead Sea Scrolls were found; mapping the boundaries and paleo-shoreline of Acre, one of the oldest harbour cities in history; locating gas chambers and mass burials at the Sobibór extermination camp in Poland; and searching for the site of the lost city of Atlantis. Some of Mr. Bauman’s archaeo-geophysical exploits have been featured in NOVA and National Geographic documentaries.

Mr. Bauman’s philanthropic work was also recognized by the Calgary Herald, who named him as one of its most Compelling Calgarians in 2014.