Meet the Members of the Women in APEGA Advisory Group

The Women in APEGA Advisory Group is comprised of representatives from across the province who work in academia and industry. This dedicated group meets regularly to assess APEGA's diversity initiatives and discuss other organizations' successful strategies.

Read more about the advisory group 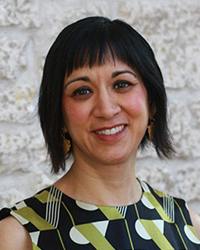 As a female professional engineer and a visible minority, Anjum is passionate about diversity and inclusion. She’s particularly interested in increasing the number of women in not only engineering- and science-related professions, but also in leadership. She was the President of Women of WorleyParsons, an employee resource group supporting the recruitment, retention, and promotion of women in the industry. In this role, she developed and managed a joint-partnership project with the WinSETT Centre and the University of Alberta School of Business to examine organizational change as it relates to women in leadership, gender diversity, and inclusivity. She recently co-chaired the 2018 Canadian Coalition of Women in Engineering, Science, Trades, and Technology conference in Edmonton and sits as a Director on the WinSETT Board. She now leads her department’s Diversity and Inclusion Committee at the City of Edmonton and chairs the Women in APEGA Advisory Group. 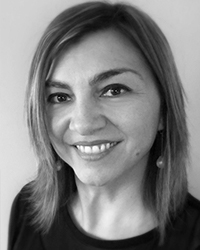 Vanessa Bellardinelli, P.Eng., was born and raised in Ancona, Italy, where she attained her European master's degree in environmental and geotechnical engineering. For 15 years, she worked as a geotechnical engineer for some of the biggest engineering consulting firms in Italy, the United Kingdom, and Australia, working on major infrastructure projects before moving to Canada in 2013 to work in the oil sands industry.

She enjoys looking at the big picture, approaching problems from a different and non-technical perspective, and communicating. Therefore in 2015, she decided to steer her career towards project management and attained the Project Management Professional (PMP) and LEED Green Associate certifications. She has since managed multimillion-dollar projects for a variety of clients in the private and public sectors. She is currently a project manager for the City of Calgary.

Vanessa has always been passionate about diversity, inclusion, and gender equality. In 2016, she was one of the recipients of the APEGA Women in Engineering and Geoscience Champion Summit Award. As well as being focused on her profession and her family, in her spare time Vanessa is a blogger, a vlogger and a writer—she has recently published her first illustrated children's book about climate change and migration.

Vanessa assumed the role of Vice-Chair of the Women in APEGA Advisory Group in 2018. 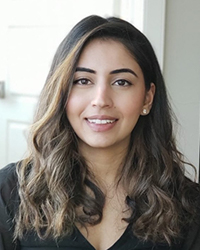 Osheen Mehta grew up in Edmonton and now lives in Calgary, Alberta. She graduated from the University of Alberta in 2013 with a bachelor’s degree in electrical engineering.

After graduation, she began her career at Enbridge Pipelines in their engineer-in-training rotational program. Through the program, she held diverse roles in various parts of the company, including pipeline integrity, facilities engineering, operations, and in infrastructure planning where she currently works.

Outside of her profession, Osheen enjoys volunteering in the community and staying active in the great outdoors. 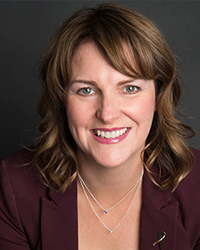 Alicia Bjarnason, P.Geol., is passionate about enhancing innovative thought within the energy sector in Alberta. After 15 years as an exploration geoscientist, she returned to school and received a master’s degree in human geography with a focus on corporate culture, diversity, and inclusion. She won multiple awards during her time as a graduate student, including a Queen Elizabeth Scholarship and an Alberta Graduate Citizenship Award.

Alicia has been a member and volunteer of the not-for-profit Alberta Women’s Science Network (AWSN) since 2013. AWSN is an umbrella organization that supports science, technology, engineering, and math (STEM) programming in Alberta with a focus on recruiting, retaining, and recognizing populations that are under-represented in STEM. She has held the positions of Member-at-Large, Vice-President, Co-President, and is now the President of AWSN.

In 2015, Alicia secured a three-year Status of Women Canada grant for AWSN and initiated the organization’s Work Re-Engagement program. The program investigated the struggles women professionals in STEM fields have when re-engaging into the workforce after an extended leave. It created a document to support this demographic on the journey back to employment, as well as leading practices for STEM companies to use—including on-ramping strategies—as they navigate the topics of diversity and inclusion. She continues to lead the greater team and initiative as the Program Director.

Additionally, Alicia is active in the greater STEM community, including as an Advisor for the Women in APEGA Advisory Group and an Executive Mentor for the Operation Minerva Program, a one-day job-shadowing program for Grade 8 girls with female STEM mentors.

She is a proud mother of two elementary-aged children, and she enjoys teaching geology in their classrooms and securing science-based programming for their school. 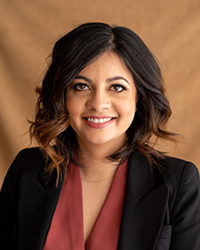 Erin Davis is a connector, change-maker, and builder of inclusive workplace cultures. She continues to follow her passion on building workplaces that work for women and recently accepted the role of director, corporate engagement, Western Canada, with Catalyst. Previously, Erin was the director, global total engagement at Stantec, and lead their global inclusion strategy.

Erin was honoured to receive the Canadian Centre for Diversity and Inclusion Award as D&I Practitioner of the Year in Western Canada, as well as the Catalyst Canada Honours Award in the Emerging Leader category for her work in the diversity and inclusion space in 2018. Outside her organization, she is the chair of the Edmonton Business Diversity Network and a founding member of Works for Women, a group that is committed to sparking dialogue, building awareness, and inspiring action when it comes to women in leadership. She’s also a founder of the C-Retreat, a boutique-style conference that brings together professional women leaders to conquer challenges, cultivate change, and create community.

Erin is a visionary who is exceptional at turning ideas into reality, helping people out of their comfort zones, and getting 25 hours of living into every 24 hours. She lives in Edmonton with her two amazing children and teaches them about a world where inclusion truly matters. 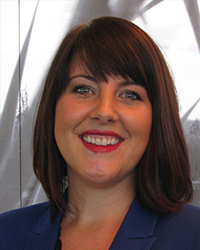 As Global Manager of Inclusion & Diversity at Finning International, Erin is responsible for leading the implementation of an ambitious, multi-year strategy to embed inclusion into all that they do at Finning.

Born and raised in Alberta, Erin graduated from the University of Alberta’s School of Business with a bachelor of commerce degree in finance. Prior to Finning, she was the Regional Director for Catalyst, a global research and advisory organization with a mission to accelerate progress for women through workplace inclusion. She started her career financing heavy equipment with General Electric and went on to provide strategy and operational consulting services as a manager with Deloitte.

Throughout her career, Erin has actively promoted inclusion in the workplace as a volunteer, including co-leading the GE Women’s Network, serving on Deloitte’s Diversity Council, co-founding the Edmonton Business Diversity Network, and serving on the Women in APEGA Advisory Committee.

She is the proud mother of two young daughters—Ava, six, and Zoe, four. As such, Erin is eternally grateful to her partner, Eric Leonty, for sharing equally in household responsibilities and championing her career ambitions, setting a strong example for the type of partnership our children deserve. 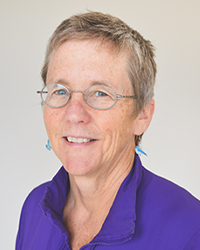 Dr. Cathy Ryan is currently the Associate Dean of Research and Graduate Education in the Faculty of Science at the University of Calgary, where she has been a geoscience faculty member since 1997. She holds a bachelor’s degree (1984) in geological engineering from Queen’s University and a master’s degree (1987) and doctoral degree (1994) in earth sciences from the University of Waterloo. She has received community and environmental awards, including:

She has authored more than 60 peer-reviewed research publications and holds the method patent for a passive gas diffusion sampler.

Dr. Ryan’s key areas of research include the fate and transport of free-phase gases in the subsurface, groundwater-surface water interaction and water quality, and agricultural impacts on groundwater.

Anna Salim obtained her bachelor’s degree in electrical engineering from the University of Alberta in 2011. She has eight years of experience in the electrical utility industry, with a focus on the planning, design, and operation of electrical distribution facilities. Currently, she is a Senior Engineer at ATCO.

Anna is passionate about increasing the numbers of women in science and engineering. She co-founded an employee resource group at ATCO with the aim of inspiring and developing female engineers at the organization. She is also enthusiastic about introducing students to careers in engineering. Since 2015, she has been an outreach volunteer with APEGA and has been involved in presentations to high school students about careers in engineering and organizing APEGA’s Science Olympics events 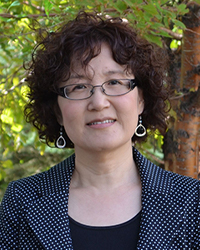 Dr. Qiao Sun is a professor of mechanical engineering and Senior Associate Dean of Diversity and Equity at the University of Calgary’s Schulich School of Engineering. As a researcher, she specializes robotics, dynamical system modelling, control, and machinery fault diagnosis. She is a dedicated educator and mentor, and her graduate students have won local, national, and international awards. Additionally, her colleagues and undergraduate classes have selected her for numerous teaching excellence awards.

In her role of Senior Associate Dean, Dr. Sun leads Schulich’s initiatives to advance diversity in engineering. The school was awarded the 2016 Knovo Award of Distinction for advancing diversity and equity, its Discover Engineering recruitment program was a runner up for the global 2017 GEDC Airbus Diversity Award, and its Cybermentor outreach program was awarded the WEPAN Women in Engineering Initiative Award in 2017. The school also won the University of Calgary’s inaugural Diversity Award in 2019 and is a champion for Engineers Canada’s 30 by 30 goal.

Kim Tulloch has more than 20 years of experience working in Natural Gas Liquids, Gas and Oil Sands businesses. She has held a variety of roles in engineering, operations management, Human Systems Engineering, major projects, and joint-venture management. She has a bachelor’s degree in chemical engineering from the University of Alberta and an MBA from the University of Windsor. She is an accredited PMP and Prosci Change Management Practitioner.

Having been involved with the Women in APEGA Advisory Committee since 2013 and part of the APEGA Mentoring Program, Kim is a strong supporter of increasing the engagement and retention of women—and girls—in engineering and geoscience.

This past hockey season, she took on the role of Team Manager for her son’s novice team—which is a whole other level of challenge!

Susan Urra, P.Eng., was born and raised in Chile, where she graduated at the top of her class as an industrial engineer. After working for four years at one of the biggest manufacturing companies in her country, she decided to move to Canada to pursue her MBA, which led to a permanent stay and a new career path in the oil and gas industry.

After 13 years in the oil and gas industry as a subject matter expert in risk management and project controls, Susan moved to the public sector. She is currently supervising the development of asset maintenance planning and business performance with the City of Edmonton’s Parks and Roads Services branch.

Susan has contributed to her profession as a mentor for female engineers with APEGA and the Edmonton Region Immigrant Employment Council. She was also the Program Chair and a presenter at the 2018 Women in Engineering Summit.