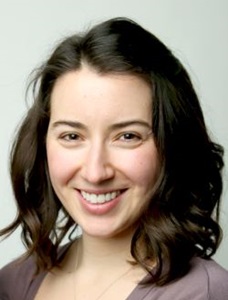 “Engineering was where I needed to be.”

The daughter of two engineers, Natasha Vallee, P.Eng., MBA, grew up in Calgary, where her parents had moved to take jobs with Esso. Throughout her schooling, she excelled at math and science; in high school, she received 100 per cent in calculus. “I never stopped asking ‘Why?’ as a kid,” she remembers. “I wanted to understand how everything worked.”

Even so, Natasha didn’t dream of following in her parents’ footsteps. She was passionate about medicine, though she found biology tricky. And she had a talent for the physical sciences—especially chemistry.

After high school, Natasha struck a compromise with herself: “My original plan was to go into engineering as an undergraduate and if I still wanted to pursue medicine after, I’d go into medicine.” Right from the start, engineering felt right—chemical engineering, in particular—but Natasha says her path wasn’t clear until after her third year of school, when she did a 16-month internship at ConocoPhillips.

Through the experience, she gained a deeper understanding of the profession and realized engineering would harness her love of math and science, as well as her natural curiosity. “I love doing puzzles and figuring out how to put things together,” she says.

How did your career evolve?

“The more I got into the industry, the more excited I became.”

After university, Natasha was hired by ConocoPhillips as a production engineer-in-training. She worked in the Calgary office for a couple of years, then moved to a field role located in Fort McMurray. Working at site as a woman, Natasha was in the minority. She remembers one meeting at which she was the only woman among 31 employees in the room. However, throughout her time in the field, Natasha felt supported and encouraged, even though she stood out from the crowd. Site staff became like family to her, even attending her wedding.

Early in her career, Natasha also gained two sponsors—her direct manager and the field manager—who encouraged her growth at the company. Three years after she started, the company created a new on-site job for her, focused on surface optimization. “These sponsors saw something in me that I didn’t see in myself,” says Natasha. “It broadened my view of myself—and my career.”

After two years in the field, Natasha was pulled in as a lead on the creation of a new Integrated Operations Centre in Calgary. “I was taking the stuff I learned at site and bringing that culture to the Calgary office,” she says. By working together and supporting each other, her team was able to change the way the company managed operational issues for their asset.

During multiple encounters within her career, things didn’t always go smoothly, which offered her unexpected lessons in engineering. “[Engineers] fail at a lot of stuff. That’s what engineering is—failing safely and learning from it to move forward,” she says.

With every challenge, Natasha continued to learn and move forward. Even with an exciting career in front of her, she still wanted more for herself and to continue learning. In 2015, she decided to bolster her career by enrolling in an MBA program.

How have you found a balance between family and career?

Natasha began her first class while eight months pregnant with her first child and continued her graduate studies after her daughter’s arrival. She completed half her degree during her maternity leave, aligning her coursework with nap time and taking evening classes.

Returning to work after maternity leave, Natasha found her situation to be more complicated than she’d expected as her daughter was not adjusting well to daycare. With this in mind, she made the difficult decision to focus her time on her family and step away from her career.

She felt mixed emotions—while she’d be able to spend more time with her daughter, she never imagined she’d leave the company after receiving so much career support over the years. Even after trialling a move to a part time position, Natasha knew her place in the short term was meant to be at home. She spoke to her boss, who insisted, “You need to do what's right for your family.” His words helped her make the choice that was right for her.

After leaving, Natasha continued her MBA work and became pregnant with her son. After his birth, she found herself with very little childcare and two more courses to complete. “Nothing could have prepared me for that,” she says of the sudden workload.

But Natasha finished her coursework and earned her MBA, gaining newfound confidence. Her newly acquired business skills led her to work with non-profits that needed help restructuring, including her daughter’s preschool. This flexible and rewarding work made her realize that she was ready to resume working as a professional engineer in a part-time capacity, which would allow her to continue her focus on her family while also advancing her career.

She got in touch with her former employer, ConocoPhillips, and pitched a flexible, part-time contract position that would leverage her engineering skills and business education to improve efficiencies within some of the company’s internal processes. Her pitch opened a door for future work, which landed her the contract she's working on today. Through this, Natasha has established a balance that works for her.

“At times, I work a demanding job. However, because of the flexibility in my contract, I still get to spend 90 per cent of my day with my kids. I don’t know anyone else who gets to do that, which makes me feel extremely fortunate,” she says. And while she works fewer hours a week than previously in her career, Natasha's confident her results are better. “I’m happier with what I do, and so appreciative of the opportunity. I can still progress my career while working in a field I'm passionate about, and I don't have to sacrifice time with my kids. Balance is an ongoing juggling act, but when you're clear on your priorities and boundaries, it feels like there's less to juggle.”

Planning a parental or maternity leave?

Check out Managing Transitions: Before, During and After Leave, a planning resource guide for employees and employers. The guide includes extensive checklists and outlines steps that individuals, supervisors, and companies can take to smoothly off- and on-ramp employees taking a leave of absence.