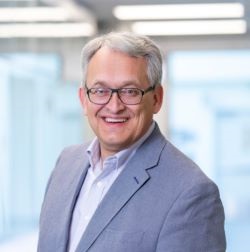 “I’ve always enjoyed the practical side of things more than the theoretical.”

Engineering was an easy choice for Ken Hawrelko. School aptitude tests and tours of local post-secondary institutions confirmed what he already knew—his practical nature and interest in science pointed to engineering. On top of this, he’d grown up on a mixed farm near Redwater, Alberta. “On a farm, there’s always equipment to be fixed, things being built, and adapting to problems— I think it all kind of fits."

Ken enrolled at the University of Alberta to study engineering and figured he’d specialize in the computer stream of electrical engineering. He’d become interested in computers during high school, when he learned programming on his school’s Apple 2e computers. “It was certainly a field that was just starting to blossom,” he remembers.

Career twists and turns after university

After graduating in 1986, Ken was hired on as an engineer-in-training at TransAlta Utilities Corporation, which had one of the biggest computer systems in Western Canada at the time. A good place to use his programming skills. Yet, while working at the company’s Sherwood Park field office, he discovered a keen interest in distribution systems. By the time he earned his P.Eng., Ken found himself designing distribution connections for customers and maintaining the power system. In the early 1990s, he implemented an automated mapping and facilities management system that turned paper maps into digital maps—state-of-the-art technology for the time.

During his time with TransAlta, Ken worked on a variety of projects related to distribution infrastructure and IT implementation. He even worked on international climate-change initiatives, including a project to design and implement energy-saving measures for an electrical utility in India. By the end of his time with TransAlta, Ken had moved through project management and supervisory roles to management positions.

In 2000, he took a position as a senior engineer in customer design at ENMAX, which had recently transformed from a city department to a crown corporation. Since the province was deregulating electricity, ENMAX was shifting from being strictly a wires company to also procuring and retailing power. The company was also exploring green energy.

Over the next two decades, Ken held many interesting roles—including vice-president of field services for five years—before becoming vice-president of special initiatives. Currently, his work includes supporting the acquisition of a utility company in Maine—the company’s first international subsidiary.

Building a better mentoring program with help from APEGA

“If we lose credibility as a profession, why would anyone believe what we tell them?”

At ENMAX, Ken realized his area of the company had become the unofficial training department for new graduates. Wanting to broaden the knowledge of new graduates and provide them with a better sense of what the company offered, he approached management to revive the company’s abandoned training program and add a mentorship component.

For help creating the program, Ken turned to APEGA, which shared its expertise. As it happened, APEGA was creating its own mentoring program at the time and asked if he’d join the Mentoring Committee. He was happy to participate. In fact, over the next two decades, Ken volunteered on multiple APEGA boards and committees.

“The profession has been very good to me, and I know the importance of integrity and doing everything we can to maintain the reputation of our profession,” he says.