When Dr. Amit Kumar, P.Eng., began his career as an energy engineer in the ’90s, few people were talking about climate change.

That has changed recently in the past few years—now it seems climate change is top of mind for many.

In 2020, APEGA awarded Dr. Kumar the Summit Award for Research Excellence. In 2021, Reuters named him one of the world’s most influential climate scientists and Canada’s House of Commons invited him to be part of an expert witness panel on the low-carbon and renewable fuels industry in Canada. He also continues to provide leadership in energy and environmental systems engineering as part of the Associate Industrial Research Chair Program funded by Natural Sciences and Engineering Research Council of Canada, Cenovus, and Alberta Innovates, a position he has held since 2012.

His research helps us understand and predict the environmental and economic footprints of energy conversion pathways for renewable and non-renewable energy sources over the life cycle of use. He develops and uses computer models to study the costs of instituting new energy technology.

Better use of our resources

Dr. Kumar’s work contributes to a shift to transfer human-energy creation and consumption to methods more amenable to the planet we call home. “The key message is to use the pathway that has the minimal environmental impact, but also to look at the economic activity—what helps move society forward?” In the next 20 years, he is looking forward to developing novel ideas and outputs to choose these pathways, leading society to a greener tomorrow and the betterment of humankind.

His work predicts the effects of energy production and use over its life cycle, from resource availability, location, extraction, transportation, and conversion, to the minutia of infrastructure issues, such as the time it would take a product to flow through a certain size of pipeline. Predicting the effect energy production and consumption have on the environment and economy on a small and large scale, he designs an entire energy system to answer a question most bristle at in high school math—what is X? In this case, his X is often the amount of carbon dioxide generated when producing, transporting, and using one unit of energy in a certain way, including at a certain hypothetical plant, using a certain transportation system, or at a certain pump. The options are endless.

A tradition of improving the world

As an energy engineer, Dr. Kumar explains he is a “jack of all trades, master of none.” He smiles and explains that he has to know a little bit of each kind of engineering specialization—mechanical, electrical, civil, and chemical—which sounds like a theme in his life. Dr. Kumar was born into a family of engineers: his father is a chemical engineer, and his brother and sister are mechanical engineers. To further the trend, he married into a family of engineers. His wife is an electrical engineer, and she has two sisters in the profession. He says they all inspire each other.

This familial trend, along with some formative moments growing up, cultivated his interest in the specialized field of energy engineering. He leans back and reminisces—as a child in Grade 7, he worked on projects exploring energy. “We built a solar cooker from scratch.” When asked if he cooked food in it, he laughed, “You could probably make your water a little warmer, but that’s it.” But the lukewarm result of the experiment triggered something larger in Dr. Kumar. “Looking at energy sources became attractive to me.”

His parents always say, “Do something that makes a difference in people’s lives,” a principle Dr. Kumar says has stuck with him. “When you do any work, you always think about how this can help to move the scale forward for the betterment of people.”

When Dr. Kumar came to Canada in 2000 to complete his PhD in mechanical engineering focused on renewable energy at the University of Alberta, greenhouse gas mitigation and a focus on renewable energy became part of mainstream conversation. “I’ve seen the transition over the last 15 years—now, everything is related to greenhouse gas mitigation. The focus is looking at reducing global warming and climate change.”

He has found his work moving to the forefront of the energy conversation, and he’s pleased to contribute to what he says is an engineer’s responsibility to make a better life by developing society. “I’m proud to be part of such a group, which is influential and making an impact in the general life of the public.”

His work bleeds into his home life. “I talk to my kids about why things are happening, why the weather is changing. We have so much wildfire, and different regions have different changes in weather.” He says he tries to make them understand the value of saving energy by switching off lights, recycling properly, and not wasting water.

He is essentially doing the same thing with policymakers at what he acknowledges is a critical point in time. Forecasting the future, he advises them on how to best keep the lights on and avoid economic or environmental darkness. He explains the key thing as an engineer is to take responsibility for the impact of your work on society. He says technology moves at a rapid pace, and engineers must learn new skills to keep up and continue to work towards net-zero footprint energy production.

He thinks back to his father’s advice to do something for the betterment of society, and says, hopeful, “You know, the sky’s the limit.” 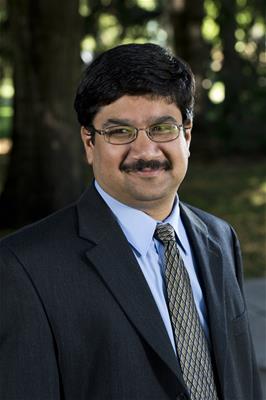