APEGA supports the innovation and diversification of Alberta’s economy, including the technology and software sectors. Mitigating any risks to public safety must be of primary importance. The term engineer—including software engineer—comes with a licensed and ethical set of responsibilities and accountabilities, and the use of this title has always been protected for a reason.

Engineering is a Regulated Profession for a Reason 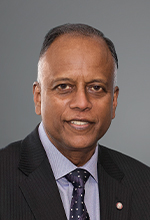 APEGA supports the innovation and diversification of Alberta’s economy, including the technology and software sectors. Engineers have always been key partners in such innovation and have helped provide Albertans with their high quality of life while ensuring their safety.

The term engineer comes with a licensed and ethical set of responsibilities and accountabilities. This is the same for other regulated professions, such as the health and legal professions.

With the ongoing advancements of technology and with increasing delegation of decision-making to artificial intelligence and software, the risk to public safety continues to be of primary importance, and there continues to be a need for regulation of software engineering and use of the engineering title. Any exception to the use of the title engineer will set a dangerous precedent and put the lives of Albertans at risk.

APEGA remains committed to being a constructive partner in the conversation regarding oversight of the computer engineering profession. We look forward to working with the province and industry to find common ground to protect public safety, grow our economy and ensure professionals who use the term engineer are accountable and regulated.

As the regulator of the engineering and geoscience professions in Alberta for more than 100 years, APEGA protects the health, safety and welfare of Albertans from unprofessional and unethical practice. We are the largest regulator of self-regulated professionals in Western Canada, with nearly 70,000 registrants who safeguard the public welfare and contribute significantly to Alberta’s economic success and quality of life.

Software Engineering is a Discipline

Title protection also exists in many other professions in Alberta and Canada—the public can rely on the knowledge that accountants, architects, lawyers, pharmacists, and physicians possess the ethical, professional, and technical competencies to perform their work skillfully and safely. Protected titles signify those who use them meet and are held accountable for their work through practice standards, legislation, and regulation. They signify a commitment to minimize the potential for harm to life, health, the environment, property, and the economy.

By regulating the restricted use of titles and designations, as is our obligation under the Engineering and Geoscience Professions Act, APEGA maintains the public’s trust in the engineering profession to keep our communities safe. 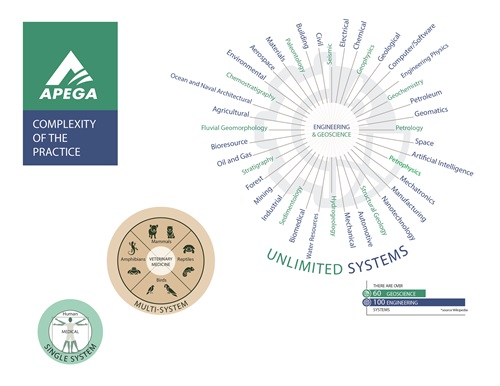 Regulation and the Tech Evolution 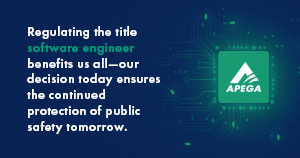 The use of the title software engineer versus software developer may to some be a minor inflection point when the singular focus is employee attraction and retention, but the decision impacts something larger: public safety throughout the navigation of rapid technological evolution. This decision will ensure accountability, rigour, and integrity in programs and systems created or managed by software engineers, resulting in processes held to a standard of excellence and safe outputs. The adverse effects of unregulated software engineering can range from minor to devastating, and it is regulators who are responsible for preventing both.

Public trust is built through a history of successful regulation, as is confidence in the programs and systems working in the background of our daily lives. Through APEGA’s regulation of the title of software engineer, the responsibility for building our province in a digital sense is in the capable hands of those you’ve trusted to physically build Alberta for the last 100 years—those held accountable through self-regulation enforceable through the Government of Alberta’s Engineering and Geoscience Professions Act.

These technological strides forward and their effects on society must be considered before they are created, which is the mandate of a professional engineer. The regulation of this evolution is a necessary responsibility: that of Canadian engineering regulators, such as APEGA. Regulating the title software engineer benefits us all—our decision today ensures the continued protection of public safety tomorrow.

Applying to APEGA as a software engineer

The application process is summarized in the following process chart.

Learn how to apply as a professional member

Software Engineering is Regulated Across Canada

Engineers Canada and the 12 engineering regulators across Canada have co-signed a statement reiterating that the use of titles such as “software engineer”, “computer engineer”, and similar titles that prefix “engineer” within IT-related disciplines and practices are restricted to those who are licensed as an engineer.

Read the full article on engineerscanada.ca

PEO has long recognized that software engineering lies within the definition of engineering under the Professional Engineers Act (PEA), where, since 1999, the field has been recognized as a distinct engineering discipline.

Regulation of Software Engineering in B.C.

Read the full page on EGBC.ca

Microsoft Canada has contravened a provincial professional code by using the word “engineer” in its international software certification program, a Québec court has ruled.

The decision by Judge Claude Millette of the Court of Québec marks the first time in Microsoft’s history it has been penalized for using the term. It also provides a historic, if largely symbolic, victory for professional engineers who have been trying to curtail the word’s use in the context of software development.

Read the full article on itbusiness.ca

Software may pose a risk to the public interest, either directly or indirectly. The development of certain categories of software is considered to fall within the scope of professional engineering in Ontario when the software is used in a manner that affects the public interest. Since the development of safety critical software falls within the practice of professional engineering, only engineers or those supervised by an engineer can develop safety critical software.

Varcoe: Trouble over titles — tech sector asks premier to weigh in on spat over software engineers

Read the article on the Calgary Herald

Is a ‘software engineer’ an engineer? Alberta regulator says no, riling the province’s tech sector

Read the article on the Globe and Mail

Read the article on Taproot Edmonton

What People are Saying on Social Media

Are #software #engineers engineers? the answer is no.

Watch the full video on TikTok

In defence of a profession - coders are NOT engineers.

“Who is an engineer is not a question of industry, it is a question of scholarship. The title of Engineer, to engineer means to understand the inherent scientific principals of a discipline enough to be able to create with them. Scientific principals do not change based on how “the community” decided to take out the semi colon from javascript because coders didnt like it. Engineers do not get to make that call with gravity in equations. We do not get to decide that using calculus is annoying and therefore we should stop using it to calculate acceleration profiles.

“Why cant coders form a designation that makes sense, they actually speaks to THEIR unique skill set. That actually is transferrable across industries. Why must they devalue a professional designation that actually has regulated meaning because... they want to? They want it all. The title and no school. The money but no responsibility. The grants and no deliverables.

“Coders need a proper designation system. That actually allows someone to understand what their skills are. Coders know how one kind of machine works. A computer. A machine that actual computer engineers built. Computer Engineers who know how to architect mother boards that accelerate the compute speed by reducing the pathways between the RAM and the processor. Software engineers will know how machine language moves between the hardware and software. They understand the reason why C and C++ are still the OG languages. How Python lacks the sophistication of a mind that knows how to allocate memory while computing their algorithms.”

APEGA has a long history of regulating and supporting software engineers. Read some of the recent features we've published on some outstanding APEGA members working in the software field. 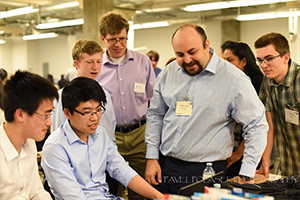 Dr. Mohammad Moshirpour, P.Eng., thinks those learning software engineering should practise using real-life scenarios from their first year of study. He’s providing this opportunity for students through bonafide industry experiences. By creating partnered projects and mutual support in his lab, he hopes to marry the interests of the exploding tech industry in Alberta and the skills of his students. 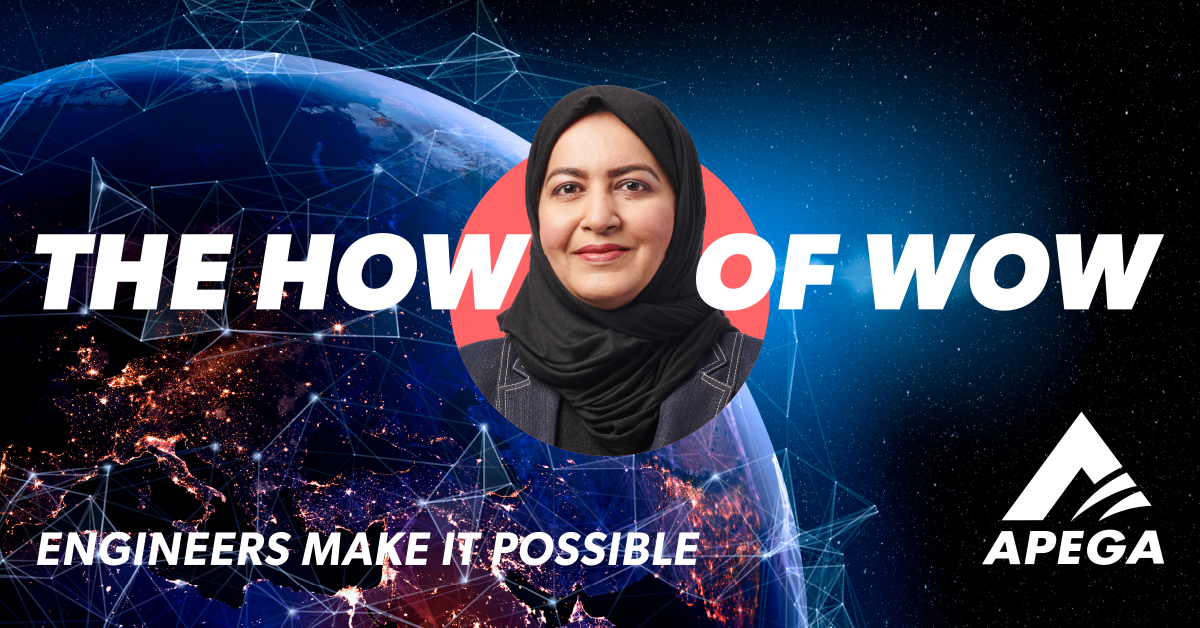 If you have relied on your vehicle’s built-in navigation system to keep from getting lost, you may want to thank Zainab Syed. She helped design the groundbreaking navigation software now found in thousands of new automobiles hitting the road in Canada and around the globe. Using sensors, the software tracks vehicles in places where satellite signals are blocked, like underground parking garages or deep inside mountain tunnels.

Read the feature on How of Wow 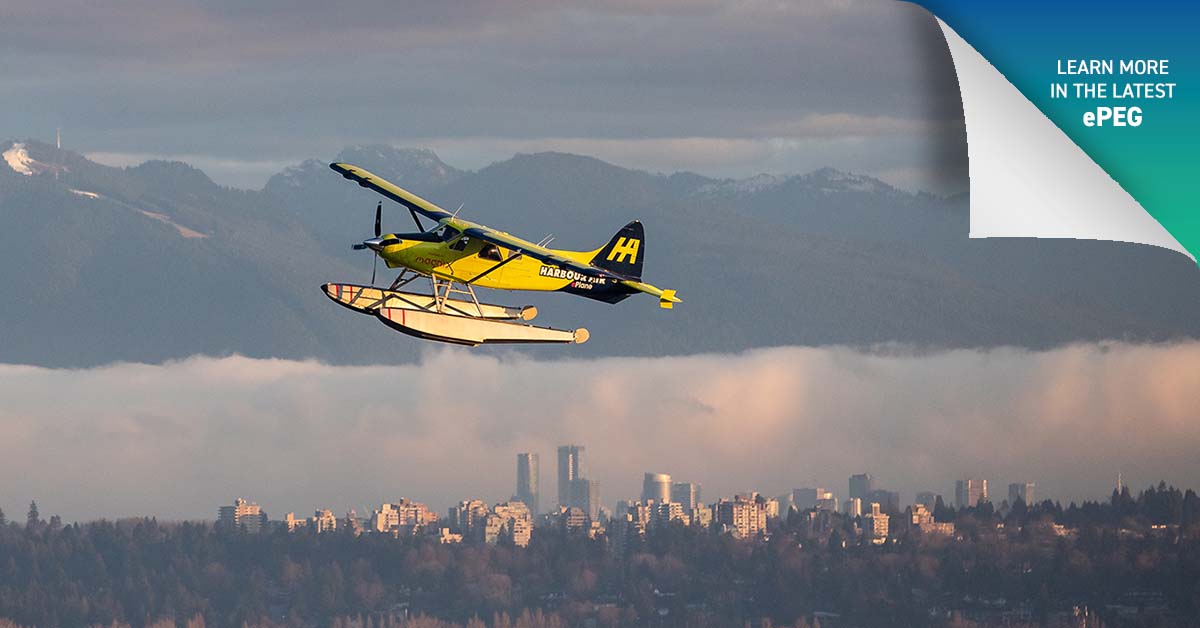 In celebration of International Civil Aviation Day, APEGA is sharing the story of how one of our professional engineers, Siyu Leng, P.Eng., helped the first commercial electric airplane take flight. 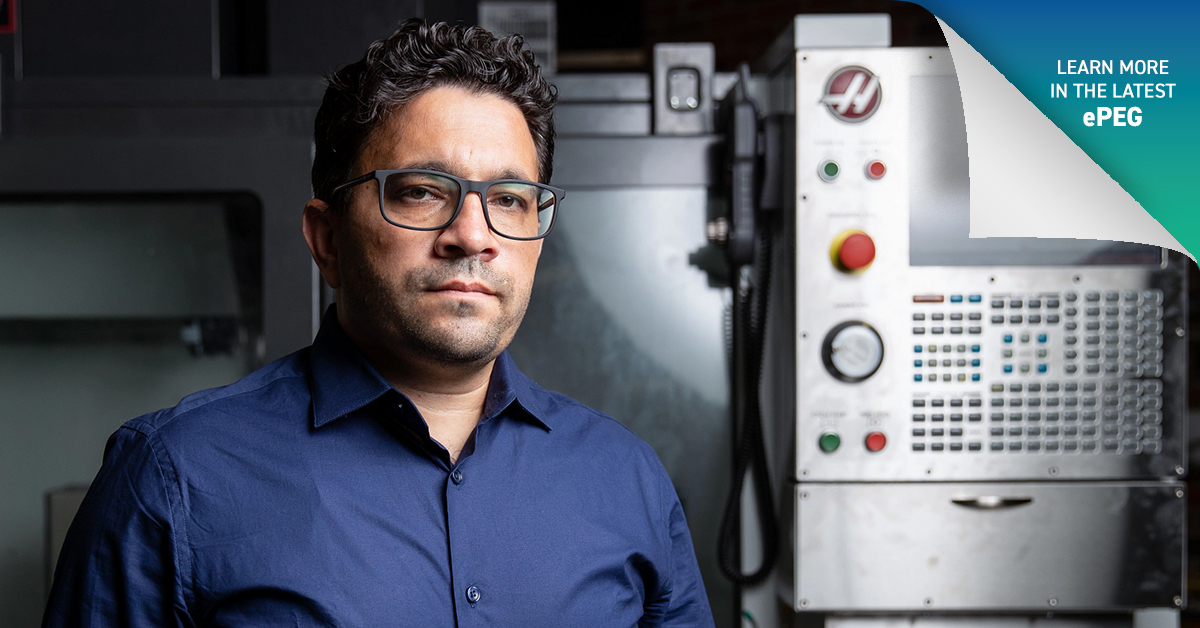 Dr. Rafiq Ahmad, P.Eng., sees the best in systems. He leverages all the useful parts, sloughs off the useless, generates maximum efficiency. "Farming is one of the least automated industries," he explains. "That's where I see a lot of opportunity." For him, this opportunity comes through creating an aquaponics system for the future. He is the founder and director of the world's first aquaponics learning factory. 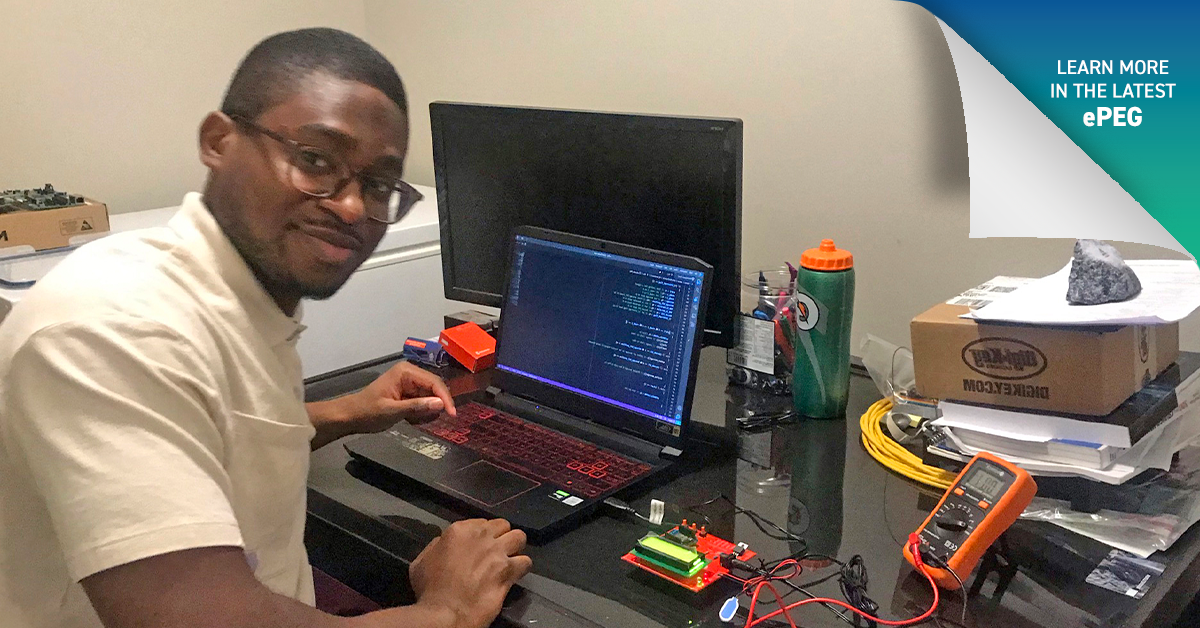 The Power of a Name

His mother, one of his greatest influences and the catalyst for his move to Calgary from Lagos, Nigeria, always told him, "Make sure you connect with others, because you can't do things alone." Habib Adesola Jinadu, E.I.T., has taken this to heart. "It's a personal goal of mine to try and network and meet different engineers. Attending APEGA's Emerging Professionals Summit was one way I met this goal." 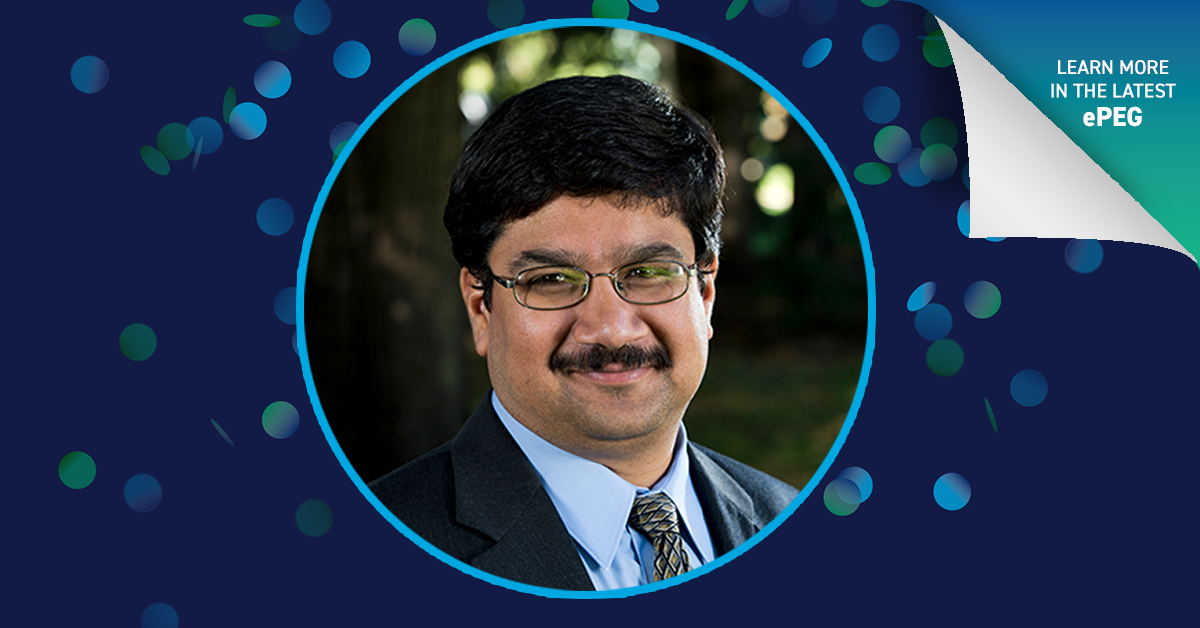 When Dr. Amit Kumar, P.Eng., began his career as an energy engineer in the 1990s, few people were talking about climate change. That has changed recently in the past few years, and now it seems climate change is top of mind for many. 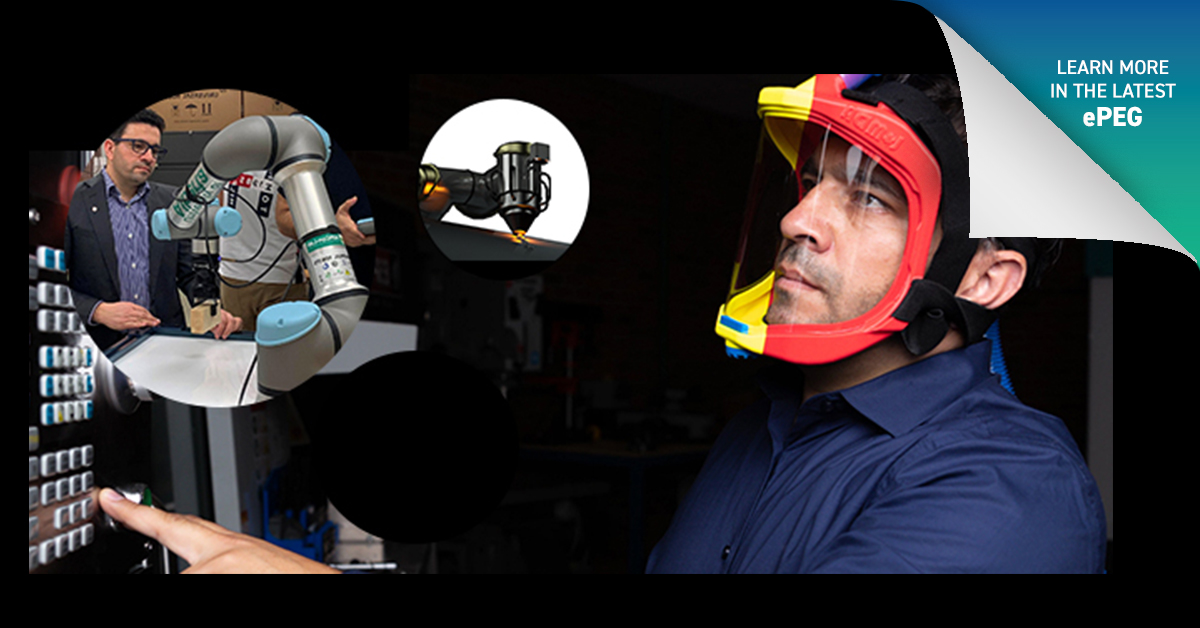 "Only nine per cent of Canadian plastic is currently recycled, and recycling processes are not very sustainable," Dr. Rafiq Ahmad, P.Eng., explains. "We want to create new, cheaper processes and a bigger impact by combining different technologies. We can do this because we are one of the labs in the world pioneering artificial intelligence and digitization." 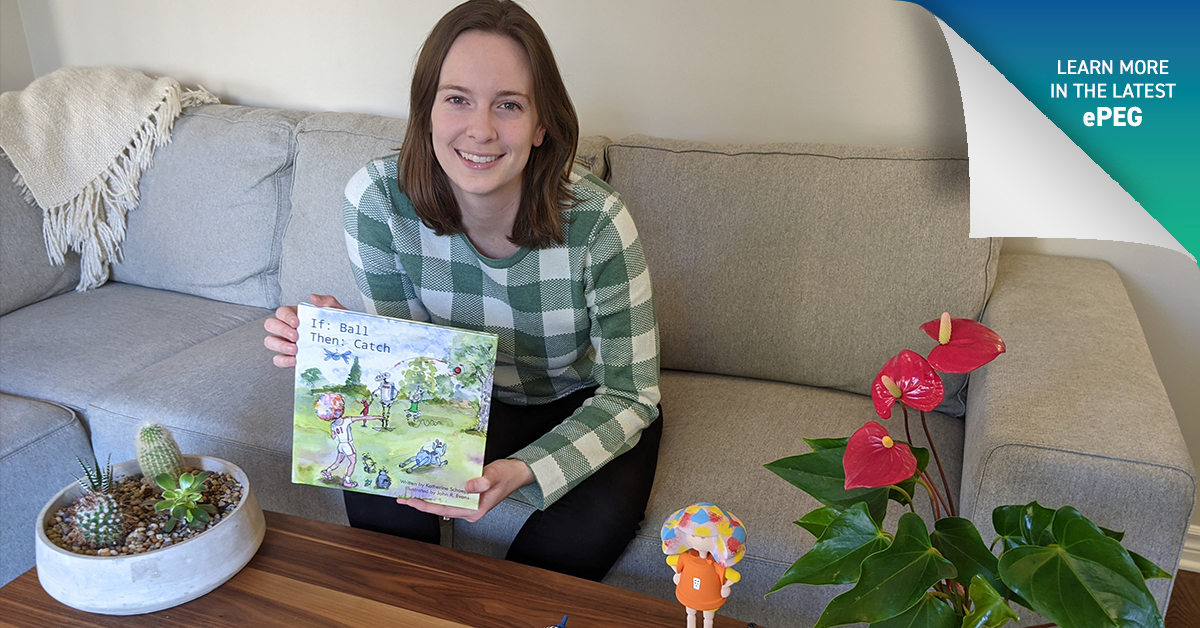 If: Ball, Then: Catch

All Dot wants for her eighth birthday is a real, live puppy to cuddle. Instead, she gets a robot dog named Sparky. The duo's adventures are highlighted in this children's book that teaches kids about friendship, perseverance, computer programming, and robotics. 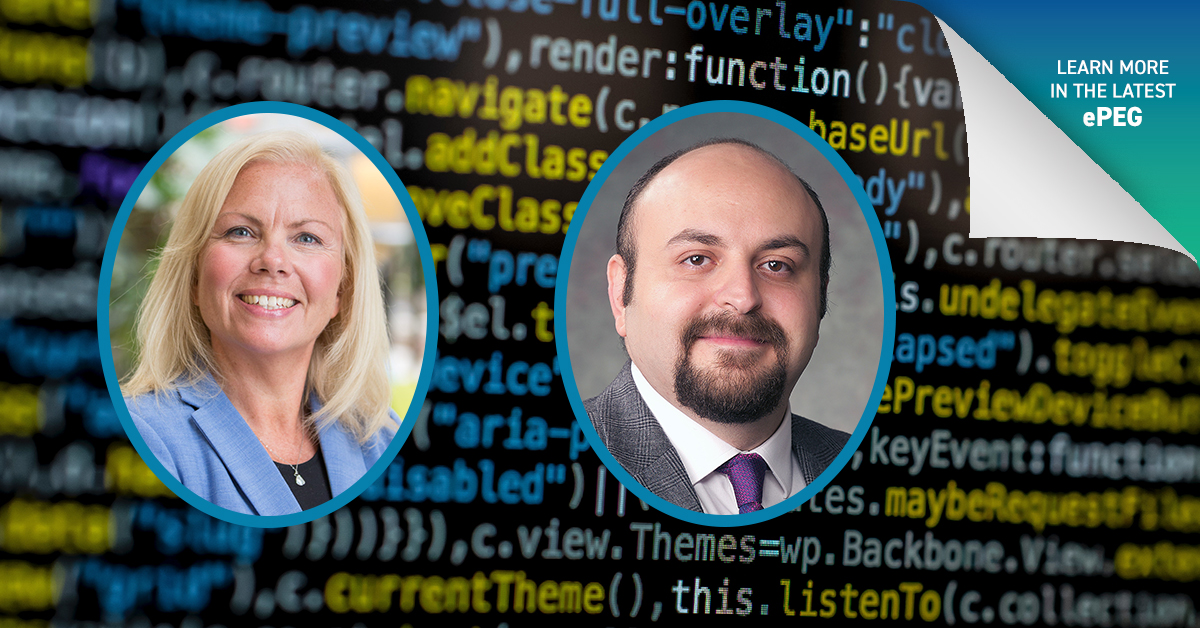 A Software Engineer and a Nurse Strike the Match of Innovation

Dr. Moshirpour, P.Eng., and Dr. Duffett-Leger, a registered nurse, use their commonalities to produce software to benefit patients, health-care providers, and students. Their latest endeavour, Ignitingale, teams up engineering and nursing students to innovate software solutions for real.