Water on the Moon: An Engineer's Plan for Space Resources

The possibility of life on Venus. The discovery of water on the moon and Mars. The advancement of the Artemis program, which intends to return humans to the moon by 2024.

Indeed, recent NASA announcements have the public buzzing with excitement about space exploration and the future of interplanetary travel.

Zac Trolley, P.Eng., can relate. He has long been interested in what lies beyond our world—and he has a plan for reaching the stars.

Trolley has been in love with the idea of exploring space since the Mars Pathfinder landed on the Red Planet in 1997. Increased Internet accessibility and technological advances meant the public could follow along as the Sojourner rover spent 83 days exploring the Martian terrain. When Trolley saw those photos, he was hooked.

“I started to think about how to get people there. How will people change if they are growing up on Mars? What does it mean if you are born on Mars? I started imagining how this world would come about, and what it would be like to be a space-faring civilization. And, until recently, it stayed in my imagination.”

Following his interest in the final frontier, Trolley has embarked on an exciting space-career trajectory. Three years after receiving his bachelor’s degree in electrical engineering in 2011, he attended a nine-week intensive course at the International Space University. In 2018, he spent two weeks at the Mars Desert Research Station in Utah as part of the Mars Society’s mission to learn how to live and work on another planet.

His next goal? Becoming a space-resources supplier, focused on supplying water to anyone on the moon’s surface.

One of the biggest barriers for long-term space exploration is the availability of resources. Space ships must contain everything needed for the journey—there’s no stopping at the corner store once the hatch closes. As you can imagine, the amount of food, water, air, and fuel needed increases with the length of the trip.

But Trolley’s a problem solver—and why transport the water when you can find it there? As co-founder of the Lunar Water Supply Company, he’s dedicated to providing a clean and reliable water source on the moon.

“If you can find a source of water in space, you’ll have the raw materials for both life support and fuel, which is a massive cost savings for missions. It simplifies everything and allows more time for exploration,” he explains. “On the moon, the biggest resource that is available to us is water. It's needed for drinking and for growing plants, and it can be split into hydrogen and oxygen and used for rocket fuel. We founded this company to provide these resources where they are needed, and they are needed on the surface of the moon.”

Trolley also has big ideas for Earth, his nation, and his province.

Canadians, he points out, are built for life in difficult conditions. Our lives have been built around growing crops, harvesting resources—like timber, oil, and gas— in harsh conditions and creating ways to move them. We are world leaders in solving problems.

How does that relate to space exploration?

Resources on Earth are finite, but we’re no longer bound to our planet. The elements that are rare on Earth are abundant in space. The quality of life on Earth can be increased by magnitudes for thousands of years by using space resources, but we need a foothold. We need to start.

“In Alberta particularly, we modularize equipment, we put it on trucks, and it's bolted together on site to provide billion-dollar megaprojects the ability to suck bitumen out of the ground and turn it into useful products,” Trolley states. “It's amazing what we do here, and this skill set is exactly what's required for space resources.”

Trolley has written extensive articles on diversifying Alberta’s economy towards the stars. He believes the world is on the ground floor of the space-resources industry and that Alberta can become a leader in the future space economy—we just don’t know it yet.

The future is here

Given where his passion lies, it’s no surprise that Trolley is a Star Trek fan.

“I think it’s really interesting—if you watch the original series, some of the technology that they imagined they would have in the future, we now have better technology than they could imagine in the ’50s and ’60s,” he states. “In a way, we are coming into that future faster than we can imagine. I love being a part of pulling that future forward, and I look forward to more of that becoming a reality in my lifetime.” 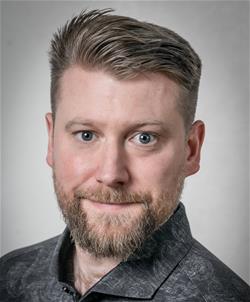