Lighting the World into the Next 100 Years

Thorin gasps in horror as the whalers in the film version of Moby Dick relentlessly bludgeon the sleek, shiny, sea creatures to death for their fuelsome blubber.

Ishmael, the lead character, explains whalers are seen as lowly murderers, but are celebrated each time a candle made of the blubber from a whale they’ve caught is lit. “But though the world scouts at us whale hunters, yet does it unwittingly pay us the profoundest homage; yea, an all-abounding adoration! For almost all the tapers, lamps, and candles that burn round the globe, burn, as before so many shrines, to our glory!”

Ten-year-old Thorin is watching the movie with his mother, Alison Thompson, P.Eng. Thompson is uniquely qualified to speak to this theme of Moby Dick—the limits of knowledge leading to the exploitation of the environment, and the vilification of those tasked with “lighting the world” with candles made of whale blubber (and later, oil and gas), until a newer, better technology hits the mark.

The whalers were replaced by the science of oil and gas technologies, she explains to Thorin—both  should be heralded for improving society, but akin to that innovation, geothermal technology is the next move forward. “That guard should take solace in the respect and appreciation for getting us to this point. Now it’s time to pass the torch.”

A torch light into a sustainable future

Thompson is about progress—perpetual movement forward towards a cleaner country, something which earned her the Centennial Leadership Summit Award from APEGA in 2020.

For years she worked in the oil and gas industry before having an epiphany about geothermal energy—why was the Canadian sector not leveraging this system that had been in use for over 100 years in other countries? “You can improve something incrementally, or you can at least try to fix it. My question is, why don’t we embark upon trying to transition the energy sector?”

Thompson heaved this gargantuan task on her shoulders in 2008 when she began Borealis Geopower, a corporation focused on developing geothermal and brine mining projects throughout Western and Northern Canda. She has been taking heavy steps forward as fast as she can ever since.

She says success feels like getting people to start questioning why we aren’t making choices to change, as she did when she started her journey, explaining getting geothermal projects built and normalized will leave a giant footprint in which others can step. “People need to see examples they can gravitate towards. I hope that people see our projects and replicate them, and ultimately see a functioning economy fueled by something that’s not hurting us.” She explains there doesn’t have to be a tradeoff between the environment and the economy.

Energy to lighten the load

There doesn’t have to be a tradeoff between people and development either, proves Thompson. Her company’s Fuel for Reconciliation geothermal energy project in partnership with Kitselas First Nation, located south of Terrace, B.C., could serve four local communities and two industrial areas with geothermal energy. At the same time, it will provide the First Nation with an opportunity for economic self-determination. Borealis Geopower’s Sustainaville project, will bring geothermal heating to Valemount, B.C., decreasing air pollution caused by residents burning wood to avoid high energy prices. This project will also bring employment opportunities to the area.

Perhaps one day, geothermal energy will be the norm—and then another day—the old guard of energy, getting replaced by a newer, cleaner technology. Just as Thompson is hopeful that other engineers will take up the geothermal call to arms, one is sure she will welcome such new technologies. Perhaps at the same time she will be heralded and respected as the whalers should’ve been in Moby Dick—as someone “lighting the world” in the most sustainable way for our time.

Find out how Thompson is creating a sustainable tomorrow with Borealis Geopower here. 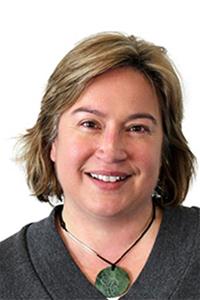