The whole world sits atop the side table in Colonel Chris Hadfield’s living room—a globe, angled so with a glance he sees a slice of our planet, a sectional view, akin to how he’d photograph Earth while floating upside down in the cupola of the International Space Station (ISS).

Flipping through his book of photos he took as an astronaut aboard the ISS, You Are Here, one realizes he has a special perspective—as a person who travelled to outer space, as someone with an eye for artful aperture, and as an individual who has aspired to be many things, achieved them, and advanced human knowledge as a celebrated explorer of our era.

He wasn’t a photographer when he climbed into the ice-laden Soyuz in the Kazakhstan wilderness—he honed the skill in a pressure-filled container orbiting at five miles per second. Hadfield snapped a single skill into a whole book. His desire to learn so he can contribute to the world gifted his fellow humans a bird’s-eye view of our planet’s splendour.

Hadfield’s takes on aspiration, advancement, and achievement are pragmatic. He advises to work to earn competence and critically consider what you create. “It’s that balance between recognizing your ignorance for how it all really works and trying to become as expert as you can as quickly as you can.”

This mirrors his affinity for sensible ability and stoicism he says lend themselves to cold climates. He grew upon a farm in Milton, Ont., where wind sweeps snow through fields for almost half the year.  “There is an urgency and rhythm to northern life that’s different than some other places. It’s less permissive.”

The family farm is where he proved his aptitude for competence by mending fences and driving tractors, and it was where his burgeoning interest in how things work began—his first call to engineering.

That same inclination for problem solving drives him to make the journey to the black expanse outside our atmosphere safer, preserving the well-being of his fellow space travellers. He’s used his skills for the complex mundane, like unplugging a space toilet, and the complex spectacular, such as suiting up fellow ISS habitants for a dangerous spacewalk. Hadfield’s even completed those tasks in tandem.

He devotes part of each day post-retirement to advancing human space flight, engineering tomorrow’s experience in the sky. “It’s fascinating, it’s interesting, it’s motivational, and intensely complex. And so much of it can only be solved through intuitive human invention and engineering. So, to me, it is my sweet spot.”

The throes of reinvention

Hadfield explains space flight is 28 times cheaper now than when he launched into a circular meander around the Earth a decade ago. “Imagine if your $280 airline ticket was now $10,” he posits, saying Elon Musk’s Starship is expected to be 280 times cheaper than the price of current space flight, radically changing the space commerce model. When space tourism explodes into existence, he states, building infrastructure will be the first challenge.

Space tourism is like any budding revolution of industry. Hadfield likens it to when cars were replacing horses: regulating the process will take time. “Cheap and safe access to space, we’re in the throes of that reinvention right now.” The proverbial horse turned to car, airplane to starship, thanks to exemplary engineering and the first brave frontierspeople who donned spacesuits the shade of a summer poppy and strapped themselves into a shuttle.

A Jacques Cousteau of above and below

As Hadfield has explored untold fathoms above our heads, he has also plunged deep into the mysteries of below. Pavilion Lake, northeast of Vancouver, is one of the few places where microbialites—living, carbonate rock structures formed by bacteria and algae—are found on our planet. He was part of a research team tasked with collecting these bulbous, brown 10,000-year-old formations, some standing a conical 10-meters tall, and learning how they formed. The team hoped to use that information in the future identification of extraterrestrial life on Mars.

As a Cousteau himself, of above and below, Hadfield says what makes a great explorer is being interested in what you find. “You have to be fascinated with the answer and make the answer part of who you are, and slowly, brick by brick, improve your tiny, insufficient—but hopefully interesting—understanding of the world.” He guides those who explore to choose risks in pursuit of knowledge and to assuage curiosity, not chase excitement. “Take risks to accomplish things that are important to you and make you into a more capable human being. To me, that’s what exploration is all about.”

Hadfield explains he thinks the perfect position in life is to work on things that pay your wage while you contribute to the world you want to be a part of. Exploration, planning, and gaining competence have enabled him to occupy this position for decades. “My recurring theme in life is: How can I contribute to the quality of life for as many people as possible in a sustainable way? That is my fundamental litmus test of what I want to be involved in.”

When Hadfield wasn’t pouring through instructional books to run over 200 ongoing experiments aboard the ISS, he turned the pages of Darwin’s Ghost by Steve Jones, which readdresses the theories in Darwin’s The Origin of Species based on what humankind has learned since. “It was one of those books that when you read it, when you go to dinner that night, you want to tell everybody the new stuff you learned, and how it’s shifted your perception of the world.”

While the globe sits in the corner, a new perspective with a simple turn, and Earth a new view each orbit through the Milky Way’s spiral arm, humans evolve by searching the unknown. Hadfield is helping position us all for the next age of discovery—a future of planned, measured advancement star-wards, making outlandish dreams a competency-driven reality for so many.

A new, colder frontier to survive—a space to call our own. 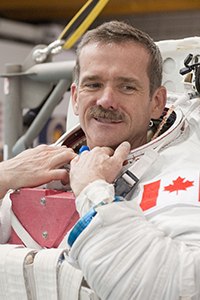 Read more about the Nexus 2022 Keynotes