On Remembrance Day, we pause to reflect on the sacrifices made by Canada’s military veterans in times of war, conflict, and peace.

This includes Canada’s military engineers, whose mission is to support the survival, mobility, and combat effectiveness of the Canadian Armed Forces.

“With most operations, military engineers are typically the first in and the last out,” explains APEGA vice-president and Canadian Military Engineers veteran Manon Plante, P.Eng., MDS, CD1. Plante retired from the military in 2013 as a lieutenant-colonel after serving nearly 30 years in various construction and combat engineering roles across Canada, with international deployments in Bosnia and Afghanistan.

There’s a saying among the troops, notes Plante: “It’s good to have friends, but it’s more important to have engineers.” 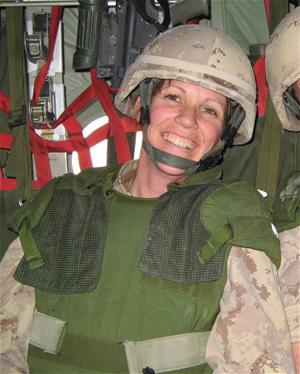 Manon Plante, P.Eng., returns to Canada from a three-week field visit to Kandahar, Afghanistan, in 2007, in a Hercules CC-130 airplane. As an engineer officer with CEFCOM (Canadian Expeditionary Force Command), Plante was stationed in Ottawa at the time and was responsible for coordinating engineering support—from engineering equipment to troop accommodations—for combat troops overseas. Photo courtesy Manon Plante, P.Eng.

The Act of Remembrance

They shall grow not old, as we that are left grow old;

Age shall not weary them, nor the years condemn.

At the going down of the sun and in the morning

We will remember them.

We will remember them.

– Excerpt from For the Fallen, by Laurence Binyon

Whenever, wherever—through war and peace

Canada’s military engineers—or sappers, as they’re also known—serve wherever the need arises. In fact, their motto—Ubique—is Latin for “everywhere.”

This includes war zones, of course.

But military engineers also provide support in times of peace. They support national development and international aid programs. During disasters, such as major floods or forest fires, they may be called in to assist civil authorities.

Over the decades, their technical and problem-solving skills—and courage, too—have been essential on military operations at home and overseas.

More recently, in Afghanistan, Canada’s military engineers were essential to international efforts to secure and rebuild the war-torn country while facing ongoing enemy attacks. One of their most important and dangerous jobs was detecting and detonating improvised explosive devices.

They also worked closely with Afghans to reconstruct the country’s damaged infrastructure—everything from schools to dams to governance structures.

“It went beyond the traditional military engineering activities of mobility and counter-mobility, and really got into nation building and protection of the Afghan people,” explains Andre Corbould, P.Eng., OMM, MSC, CD.

Corbould, a combat engineer who served 28 years in the Canadian Forces and retired in 2012 as a brigadier-general, completed three tours in Afghanistan. While serving there in 2010 and 2011, as deputy commander of Regional Command (South) Headquarters, he worked with 24 Afghan ministries to develop a national reconstruction plan and help bring stability to the country.

“The key was to let the Afghans lead the reconstruction, giving them support and assistance in getting it done,” says Corbould, who today serves the public in another way—as city manager of the City of Edmonton.

Prior to Afghanistan, Corbould completed tours in Iraq, Kuwait, Bosnia, and East Timor. Looking back over the past 100-plus years of Canadian military operations, he notes that the mission of military engineers has not changed considerably—it remains mobility, counter-mobility, and protection of friendly forces.

“But how we do that has evolved significantly, with new technologies and innovations,” he says. 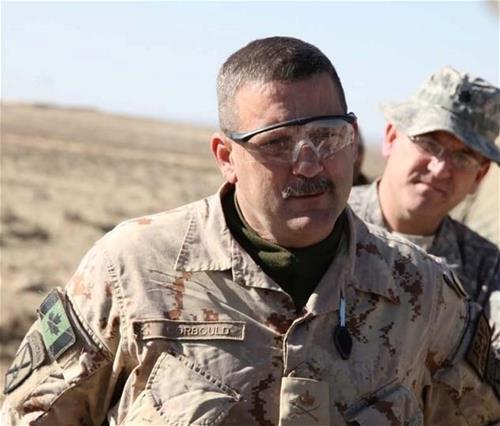 In the early ’90s, Corbould used global positioning satellites (GPS) for the first time as part of a United Nations team that established a new border between Iraq and Kuwait.

“GPS obviously did not exist in the first and second world wars, but does exist now, extensively. That’s an innovation that allows us to do things quicker and more accurately,” he says. “A lot of new technology is driven by military need, and then used in other applications in the civilian world.”

Some of these technologies have changed how we live—in big and small ways. They include walkie-talkies, the Slinky, turbo jet engines, computers, digital cameras, drones, microwave ovens, and the Internet.

In some cases, military engineers are the inventors. In other cases, ideas are developed and refined by researchers, scientists, or private industry. And sometimes, it’s a partnership between them.

“Military engineers in the field may be faced with challenges they need to find a solution for,” notes Plante. “Military research and development may look to what industry is doing, and how it can be adopted or adapted for military use. There is also collaboration with industry—it’s often a joint effort.”

The 100th anniversary of the remembrance poppy

The poppy reminds us of the sacrifices of those who went to war for our freedom. The symbol—worn on our left lapel, over our hearts—comes from the poppies that exploded thick over Flanders, France, after the fighting of the Napoleonic Wars in the 19th century. It was these same poppies that Lieutenant-Colonel John McCrae was referring to in 1915, when after the death of a fellow soldier, he wrote the poem In Flanders Fields. In 1921, upon the idea of Madame Anna Guérin of France, who was inspired by the poem, Canadians adopted the donning of the remembrance poppy.

This year marks the 100th anniversary of the remembrance poppy. The Royal Canadian Legion estimates around 20 million poppies will be distributed throughout Canada to mark the century of gratitude, with proceeds supporting war veterans—those who sacrificed for our country and our freedom.

Military and Industry: Partners in Innovation

One example of military engineering innovation later adopted by industry is the Bailey bridge. A portable, prefabricated truss bridge, it was invented by a British military engineer, Donald Bailey, during the Second World War.

The bridge, which can be built with no special tools or heavy equipment, made it easier for troops in Europe to travel over streams and rivers. It is still used extensively in civil engineering construction projects, in remote locations, and on forestry roads. You’ve probably driven over one and didn’t know it.

The units can purify any water in the world, including contaminated and sea water. Today, this technology is often used in civilian applications, especially during rescue or relief operations after natural disasters such as floods, fires, earthquakes, typhoons, or tsunamis. 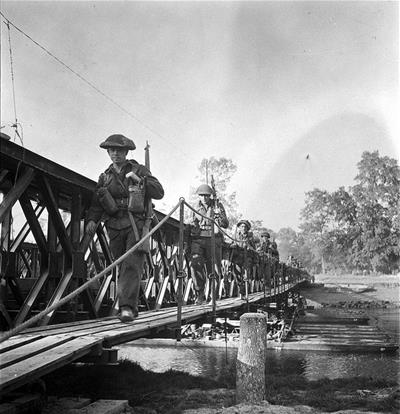 Infantrymen of the Stormont, Dundas, and Glengarry Highlanders crossing the Orne River on a Bailey bridge built by the Royal Canadian Engineers en route to Caen, France on July 18, 1944.

Sappers: What's in a Name?

Military engineers are also called sappers, a title that comes from the verb sap, which means to tunnel or trench underneath fortifications. The use of military engineers stretches back into the era of castles, when one way to breach a castle or city wall was to tunnel underneath it and cut out the foundation. In the Second World War, for example, saps were used to place explosive charges underneath trenchworks.