Professional engineer Vivin Thomas, capital projects engineer with the Calgary Parking Authority, drives around the concrete-laden and tree-flanked roads of the East Village in the black BMW he spends his spare time fixing up. He zooms beside, atop, and below his past development projects, while a basketball lolls about in the back seat.

He is on his way to his newest accomplishment—the Platform Innovation Centre and Parkade, which opened on May 26, 2021—to marvel at the finality of its completion and its engineered dexterity to morph to meet the future needs of the area. Leading this 250,000-square-foot, $80-million project design and build has enveloped two and a half years of his professional life.

He’s also going there to shoot some hoops. 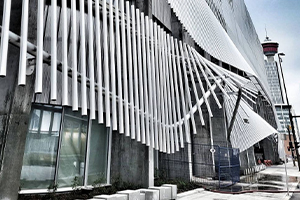 As he circles into the building, he glances around at the concrete balls lining the entrance and reflective half-globes spotting the ceiling, leading drivers like mirrored beacons into the open-air parkade and innovation centre of the future. These design choices echo throughout the seven-floor oval structure—it is one of the first convertible parkades in North America.

“As a project, this was really forward-thinking. I think as a growing city, we need to look at new opportunities. I love cars, but we must think about new forms of technology, innovation, and transportation—we must also look at it from the lens of the environment. I think the City of Calgary is doing its part to make sure we do the right thing for the future and future generations.”

The Calgary Municipal Land Corporation (CMLC), the Calgary Parking Authority (CPA), Platform Calgary, and the City of Calgary birthed this project seven years ago as part of the East Village Redevelopment Plan. The city needed parking around the new Calgary Central Library, Bow Valley College, City Hall, the Stampede grounds, and the BMO Event Centre, but wanted a building that would contribute more to the downtown core—now and in the future.

The CPA already owned land in the perfect location to develop a fitting solution, but there was one problem: surrounded by barriers, the lot was potentially undevelopable. It straddled an LRT line, and train tracks and a large water main ran alongside it. A proof of concept to solution the span over the active LRT line and water main was completed by Entuitive in 2017, with detailed design taking place in 2018.

Encompassing the needs of the downtown community 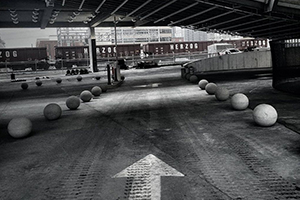 The Platform Innovation Centre and Parkade houses more than 500 parking stalls, six (with the potential for up to 20) electric vehicle stations, 39 bike-lane-accessible bike racks (60 reserved bike stalls), and a public plaza and sport court. There are also plans for a café on the main floor. A 50,000-square-foot hub for tech and innovation owned by Platform Calgary on the second floor is opening in fall 2021, bringing together more than 50 tech and innovation partners under one roof to support entrepreneurs and their startups to succeed. The rooftop sits ready to host yoga classes, pet-friendly events, photoshoots, and office and community parties.

There is also the basketball court, where Vivin is headed to toss free throws.

“We want to make sure it’s not only a car parkade—it’s an innovation centre, a community-gathering space, a café, a place to play sports and hold events like community get-togethers and conferences.” Vivin explains these types of events and partnerships, as well as the parkade itself, will ultimately raise revenue for future transportation projects in the city.

The location of the parkade, near the public library and the train station, enables drivers and bikers alike to get in and out of downtown quickly, which contributes to environmental sustainability in transportation and benefits the surrounding community. But what sets this structure apart is its ability to transition from a parkade to a residential or commercial space in the future—its over seven-foot-tall ceilings accommodate this conversion. Vivin explains the parkade’s coolest feature is its uniquely designed ramp that sits in the centre of the structure, surrounded by Platform Calgary’s office space. The ramp enables further development on the top levels of the parkade. 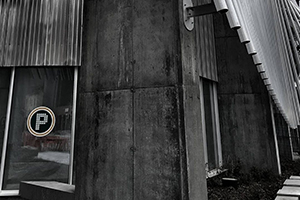 Vivin’s previous projects, many located downtown, gifted him specific knowledge of the area and a distinctive understanding of what Calgarians want. Working for the City of Calgary, he has improved city-owned infrastructure such as streets, plazas, parks, and open spaces, and he has increased the safety for pedestrians walking through underpasses.

He’s made downtown more bike-friendly and led the flood-mitigation project at the Calgary Zoo—all of which helped him navigate the project’s complexities and develop his approach to lead the build of the Platform Innovation Centre and Parkade.

Vivin took part in everything from the design process to budgeting and managed teams of contractors, regulators, and project partners. He describes working with so many different groups of people at once as the project’s greatest challenge.

“I think the most important thing is to communicate effectively and work as a team. Being personable and connecting with people based on their interests. Developing those relationships helps keep things progressing,” he smiles. His engineering perspective is inclusive. “We accommodate all users in the design and build. We’ve created access for bicycles, electric vehicles, and gas-fuelled vehicles, and we have incorporated a convertible element to the building to account for users of the future.”

An example to broaden the sphere of possibility 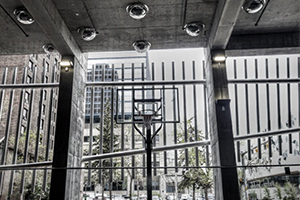 Vivin hopes to one day see the parkade converted into a residential or commercial space and remain a multi-use development site. He says the project is a great case study. “This is a learning opportunity and a stepping stone for other developers who want to look into future-proofing or use the convertible factor for future designs.”

He pulls into a stall, glances out at the angular mosaic of the library, and meanders over to the basketball court. The tangerine-hued ball reflects from mirror to mirror in the half-bubbles on the ceiling.

He palms its bumpy surface and takes a shot. The ball sinks through the net—another technical, and stylish, win for Vivin in the East Village. 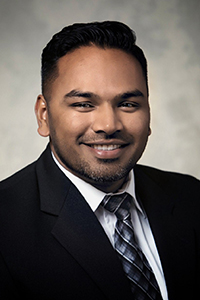