Energizing a Future for Yitong Wu

Engineer-in-training Yitong Wu, pulls up a map of China and describes why high voltage direct current (HVDC) technology would benefit the country’s environment. Resources like water, coal, and wind, abundant in the western portion of the country, must be transported to the resource-scarce eastern areas to generate energy locally. He explains it is kinder to the environment and reduces energy transmission losses to produce energy in provinces with abundant resources and then transport it to resource-scarce provinces via HVDC technology. This is his area of expertise: he is currently earning his master's in electrical engineering, specifically in energy systems, at the University of Alberta.

Wu moved to Edmonton from China at the age of 14. He is active in the Chinese community, spending much of his free time tutoring new Canadians in English and volunteering with the Chinese Students & Scholars Association and the Chinese Graduates Association of Alberta.

Reaching out to the engineering community

Wu is reaching out to others in the engineering profession through APEGA's Mentoring Program, and he also made connections at APEGA's Emerging Professionals Summit in September.

His mentor through the APEGA Mentoring Program has helped him with his résumé and shared her experiences working in the energy sector.

"She provided me with advice in terms of how to job-search and which skills are required to become successful in the industries, and I appreciate her help very much."

Wu currently mentors fellow students having trouble selecting a program and who are interested in obtaining their master's in engineering. "It's a valuable process to mentor other people. It's something I really like to do." He is looking forward to one day achieving his professional engineer designation and becoming a mentor for APEGA.

Networking for a future

Wu says he puts himself in new situations to promote self-growth and improve his skills. "The most important thing would be whether you are able to communicate well with other people," explains Wu. It's no surprise his favourite session at APEGA's Emerging Professionals Summit was the networking session, where he connected with others in the professions. Hearing about the career paths of others is one way he evaluates his own choices, and he is grateful to have received advice on his job search and building an engineering career. He is looking forward to attending the Emerging Professionals Summit again in 2022.

Just as China moves energy from West to East, Wu hopes to energize his career to new places and opportunities.

Check out APEGA's opportunities to connect

Find out more about APEGA's Emerging Professionals Summit and make plans to attend in 2022. Learn about APEGA's Mentoring Program and sign up as a mentor or mentee today! 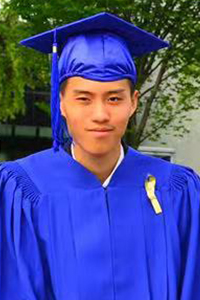