Celebrate the First Footfalls on the Moon

The anticipation is palpable as APEGA President Lisa Doig, P.Eng., speaks at the opening of a star-studded exhibit at TELUS World of Science—Edmonton. 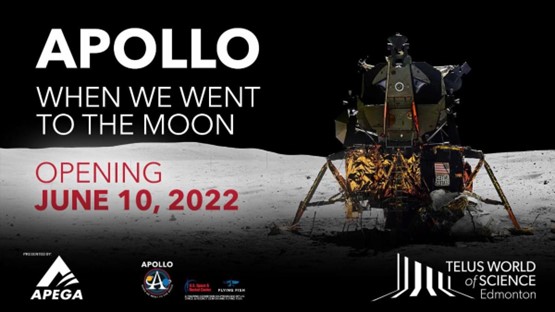 APEGA is the presenting sponsor of Apollo: When We Went to the Moon, which features interactive educational displays and artifacts from early space missions, including Apollo 11, the legendary spaceflight marked by the first-ever footfalls on our cratered sidekick.

The Eagle has landed

“It’s no surprise to me they were engineers,” says Doig of astronauts Buzz Aldrin and Commander Neil Armstrong, who with the words, “Houston, Tranquility Base here. The Eagle has landed,” were the first two people on the moon. Aldrin was a mechanical engineer and Armstrong an aeronautical engineer.

The professions have always attracted and promoted bravery, a strong practicality, exceptional ability, and the resolve to grow humankind’s collective scientific knowledge—engineers and geoscientists have a powerful drive to execute the extraordinary.

Doig explains that courageous and innovative people are propelled to action by internal forces like dreams, a desire for the novel, or the determination to build or prove something, as well as external forces like competition, social dynamics, and politics.

An example of these external forces at work: in 1957, when the Soviet space program launched Sputnik 1—the first artificial Earth satellite—into its low elliptical orbit, this sparked the space race between the United States and the Soviet Union. The competition spanned a decade, spurred by the dream to be the first to reach the beckoning glow of the moon

John F. Kennedy, as president of the United States, announced a goal for his country: to land a man on the moon and safely return him to Earth before the end of the 1960s.

He understood the gravitas of the task he set in front of engineers and geoscientists. “No single space project in this period will be more impressive to mankind, or more important for the long-range exploration of space, and none will be so difficult or expensive to accomplish,” Kennedy said. He challenged engineers to create what did not yet exist, like a revolutionary liquid-fuel rocket engine.

Doig explains the engineers who developed the three sections of the Apollo 11 spacecraft, models of which you can see in the exhibit, used their skill to keep the astronauts safe in hazardous and harsh surroundings, launching them on their journey and returning them safely home. By studying samples of moonrock, geoscientists became knowledge leaders about the satellite that pulls our tides.

The call to rocket through the Milky Way is still strong. To this day, professional engineers and geoscientists strive to reach our neighbouring planets in pursuit of adventure, knowledge, and advancement,” says Doig.

The objects in the exhibit are more than what they appear, according to Doig, who explains they are not just technological advances—they are symbols of accomplishment.

Commander Neil Armstrong’s personal preference kit contained a piece of wood from the Wright brothers’ 1903 Wright Flyer’s left propeller and a piece of fabric from the plane’s left wing. This is a testimony to how these engineered objects, these tactile fragments of history, hold such meaning—they are reminders of the fortitude of innovators working for something larger than themselves.

Doig encourages everyone to walk through the exhibit and think about how what you are seeing is a marvel of engineering. How the lunar meteorite you can touch is a moon mystery, solved by a geoscientist.

Count down in the Apollo 11 launch experience or leave footprints in craters in the virtual moon walk. Step out of the lunar module into what Buzz Aldrin described as the “magnificent desolation of Tranquility Bay” and watch the television broadcast of the moon landing that inspired astronauts, including Canada’s Colonel Chris Hadfield, to seek their own skyward journeys.

Visit the exhibit and, like the engineers and geoscientists of the past 50 years, let your dreams shine like a supernova. 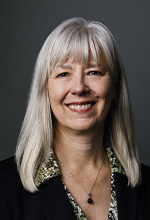 Start planning your visit to the Apollo: When We Went to the Moon exhibit at the TELUS World of Science—Edmonton today!

If you provide your APEGA registrant card or letter of eligibility when purchasing admission, you will receive 10 per cent off. Read more about APEGA registrant discounts at the Telus World of Science—Edmonton.

Blast off with the Apollo exhibit