Exploring the Riverbank with a Geoscientist 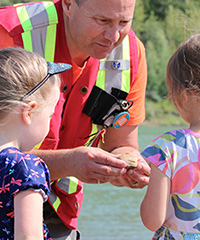 Professional geoscientist Keith Diakiw, CD, P.Geo.’s love of Mother Earth and her mysteries flourished when he was young. As a 10-year-old, he looked forward to weekends when he’d hop on his black and yellow BMX and pedal to new subdivisions in his hometown of Hinton, AB. There, crews digging foundations created abundant rock debris piles—fodder for Keith’s explorations and budding rock and mineral collection.

“It all started with one rock—because every rock has a story to tell. It was those many years of exploring, realizing that every rock I picked up was unique. I was fascinated by the colours, texture, and crystal make up—it blew my mind. I wanted to know more and learn why landforms are the way they are and how they form.” His interest grew over time as he went to school to become a geoscientist.

Keith says learning and sharing rock history is a thread that connects us to our past. He sees himself as a scientist of Mother Earth and generously shares his knowledge with others. “Mother Earth is our classroom, and every geographic region of the world has a story to tell.” Keith, a proud Métis, is not only passionate about sharing Alberta’s rich sedimentary history with others, but also provides earth science–focused hikes with an Indigenous lens through his company Talking Rock Tours. 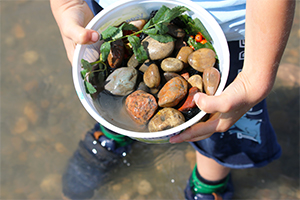 Now, he’s sharing his knowledge with the children of Alberta at APEGA’s Rock & Fossil Clinic held virtually over two weekends, on October 16 and 23, 2021. During these online sessions, he will highlight some rocks and minerals kids can find along Alberta’s riverbanks, encouraging families to reconnect with the land they live on and their own backyards—in his case, the North Saskatchewan River in Edmonton, AB. His family often explores the river valley near Rundle Park. “Our river valley over 20 times larger than New York’s Central Park—we have such beautiful green space in the heart of the city, with glacier-fed water. We are so lucky to have such a beautiful place to discover.”

Rocks and minerals along the North Saskatchewan River 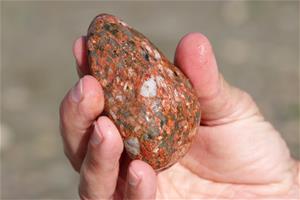 Pink granite is evidence of the Laurentide Ice Sheet situated above Edmonton 14,000 years ago. According to Keith, some pink granite specimens can be more than three billion years old. “When you pick it up, you’re holding a piece of the Earth’s early history inside your hand. The ice sheets are long gone, but it’s the rocks that tell the story of our last glacial period.”

When you tap sandstones together, they will sound like pieces of glass tapping against each other. “If you bury sandstone deep enough, the heat and pressure will build because of the sediment pushing down on it hundreds of meters below the surface and it will eventually turn it into quartzite.” 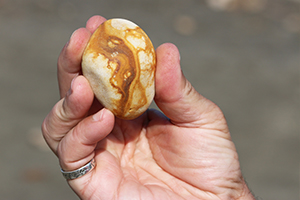 There are a lot of buildings in Edmonton made of sandstone. To identify this rock, check if you can see the individual grains of sand that form it. If you can, it’s sandstone. Alberta also has similar rock formations that contain large amounts of iron. “When the iron runs off the rocks, it creates cool natural art, like the orange squiggles on this rock. The waviness looks like someone painted it, but it’s naturally made. The water that ran off this rock was rich in iron and transformed it from a white rock into something very beautiful.”

When you tap sandstones together, they will sound like pieces of glass tapping against each other. “If you bury sandstone deep enough, the heat and pressure will build because of the sediment pushing down on it hundreds of meters below the surface and it will eventually turn it into quartzite.” 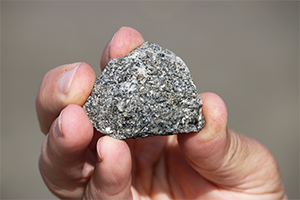 Schists – along with quartzite and marble – are common types of metamorphic rocks. “Metamorphic rocks are usually the most beautiful, containing all the various minerals that are formed as a result of heat and pressure. In some metamorphic rocks, you can see individual layers that have been modified and look like sausage links, or wavy beds.” The rock to the left is a schist, which has mica in it—the part of the rock that glitters in the sun and looks like sparkling diamonds. A schist can contain more than one type of mica.

There are four types of mica: 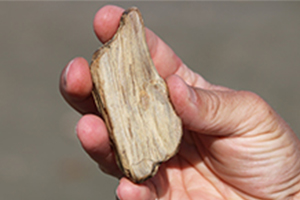 Petrified wood is a fossil that is formed when parts of trees are buried for a very long time. The organic parts of the plant are replaced by minerals, forming a lithified rock. “You can see the lines that make up the fiber of the tree,” says Keith. “When tapped, they make a higher, glassier noise than a piece of shale would, for instance.” 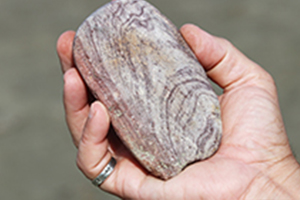 Quartzite is sandstone that has been modified through heat and pressure, so you are unable to see individual sand grains in the rock.

Quartzite can be many different colours, like white, purple or yellow. They can also be semi-translucent and look like a piece of cloudy glass. 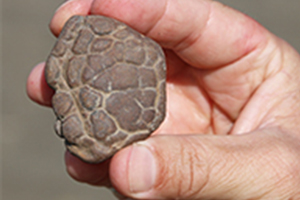 Ironstone concretions are globular, heavy, and dense, and they can have unusual appearances that look like a turtle shell or meteorite. 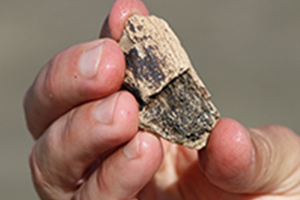 If you’re lucky, you can even find a dinosaur bone in the river valley. One way to tell if you’ve found a dinosaur bone is to look for porous bone marrow texture or a purplish white surface.  Also, wet your finger and touch it, if you feel a subtle stickiness like touching a sticker, good chance you found bone. 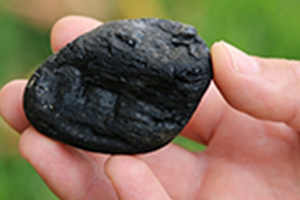 Lignite, also known as brown coal, is low grade coal that is great for burning to generate electricity! It is black, light, and breaks easily. 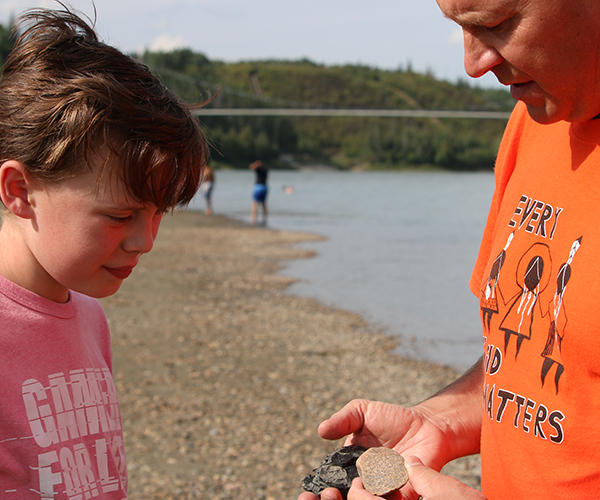 Sign up for the virtual Rock & Fossil Clinic today!

Do you have a child interested in learning more about Mother Earth? Register today to learn more from Keith and his fellow professional geoscientists at APEGA’s virtual Rock & Fossil Clinic on October 16 and 23!