Preparing for a successful event

At the Council meeting on March 24, APEGA Council approved special rules of order for the 2022 AGM outlining procedures to be followed before and during the virtual meeting. These rules—along with the AGM agenda—were posted on the AGM registration page, shared with all members in advance, and read aloud at the beginning of the AGM.

As it had in 2021, Council engaged a parliamentarian to ensure the meeting complied with Robert’s Rules of Order and adhered to APEGA’s bylaws. The parliamentarian also attended the event remotely and was available for consultation during the proceedings.

APEGA contracted a third party to provide audiovisual support and reduce potential technological barriers for attendees. Eligible voting members who wished to speak on a motion could address the assembly live using a toll-free number.

During the proceedings, two motions were put forward by members. The first motion requested council conduct, or direct staff to conduct, a thorough review of its sole-source digital signature policy, which is supplied by Notarius. This motion passed with 70% in favour. The second was a motion for APEGA to create a technical committee and journal where members could share articles relevant to the professions. An amendment to this motion to create an online technical forum failed, and the main motion was also defeated, with 26.7% in favour and 73.3% opposed. The successful motion will be discussed at the Council meeting on June 15–16 and an update will be provided to APEGA members when it is available.

During the meeting, the date for the 2023 AGM was approved by the members.

After the formalities concluded, Pearse was welcomed to the Order of the Vest. The vesting ceremony is an annual tradition where past-presidents welcome the next member to join their fellowship. Van der Put welcomed Pearse by presenting him with a tartan pattern from County Cork, Ireland, which Pearse selected to represent his Irish heritage. Van der Put also announced Pearse’s recognition as an Engineers Canada Fellow for his contribution to APEGA and the professions. 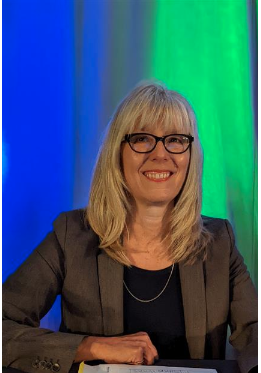 After Pearse transitioned to past-president, he introduced new APEGA President Lisa Doig, P.Eng. In her introductory speech, Doig noted her openness to new ideas and different perspectives—an approach that will serve her well as APEGA president—and how she sees alignment with APEGA’s commitment to fostering equity, diversity, and inclusion in the engineering and geoscience professions.

Doig also discussed her immediate priorities as president. “My first focus as APEGA president will be to ensure the successful implementation of the upcoming legislation set to replace the Engineering and Geoscience Professions Act.” She added that APEGA will undertake a thorough review of its bylaws to ensure compliance with the new legislation before it comes into effect in January 2023.

Another priority of President Doig is to continue increasing the profile of the professions with the public. “Our members contribute significantly to the province’s economic success and enhance the quality of life Albertans enjoy. And yet, we aren’t always front of mind when public decisions are made involving engineering or geoscience.”

Her final priority is to continue supporting APEGA’s volunteers. President Doig pointed out that in 2021, APEGA had more than 850 volunteers who logged almost 38,000 hours of the invaluable work that allows APEGA to perform its regulatory functions. She thanked the volunteers for their ongoing dedication, enthusiasm, and leadership and pledged to ensure APEGA remains a worthwhile investment of their time.

To find out more about our new president, watch for our annual Meet the President story in the coming weeks, which will be shared in the ePEG newsletter.