On March 11, 2019, APEGA and the Association of Science and Engineering Technology Professionals of Alberta (ASET) signed and submitted a joint letter to the Government of Alberta (GoA) recommending changes to the Engineering and Geoscience Professions (EGP) Act and related regulations. These recommended changes came after five rounds of stakeholder consultation sessions and more than 7,000 comments from our members.

“Continued partnership and joint regulation with ASET is paramount to the safety of Albertans. I believe this joint submission will improve and modernize the legislation,” said Jay Nagendran, P.Eng., Registrar & CEO of APEGA.

The EGP Act is the joint legislation for APEGA and ASET. The act has not been significantly updated for nearly 40 years. In that time, the practice of the professions has changed, as has business, industry, and society in general.

More than 160 recommended changes were jointly submitted to the GoA. To better serve the public interest, the following key regulatory recommendations were included in the submission:

Although some joint legislative matters still need to be resolved, APEGA will continue to work closely with ASET and the Government of Alberta in the hopes of having the legislation proclaimed in 2020 to coincide with APEGA’s centennial.

As part of the joint letter signed by APEGA and ASET, we submitted to the Government of Alberta (GoA) a policy development document (PDD) outlining recommended changes to the Engineering and Geoscience Professions (EGP) Act, General Regulation, and ASET Regulation and Professional Technologist Regulation.

These recommendations are based on a thorough review of other self-regulation legislation in Alberta and Canada, as well as the many consultations APEGA had with its members and Council between 2014 and 2017. Details on the consultations and their results are posted on APEGA’s legislative review website.

The PDD has two parts: A and B.

Download each part of the packet sent to the GOA 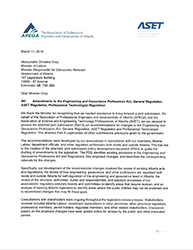 The Joint Letter from APEGA and ASET (PDF)

The GoA is the owner and holder of the legislation. As such, the government gives APEGA the privilege to self-regulate the professions. The GoA will review our jointly submitted recommendations and make the final decision on which ones to include and how they will be phrased.

APEGA is hopeful that the government sees it fitting to modernize the legislation to coincide with our centennial in 2020.

Although Part B is outstanding, this should not delay the process of updating the legislation. Some of the items in Part B may be managed through a memorandum of understanding between APEGA and ASET and others may require a government decision on how the professions are regulated, if it is to be different from the current approach of one ACT and two Associations.

If you have questions about this or any aspect of the legislative review process, please email [email protected].